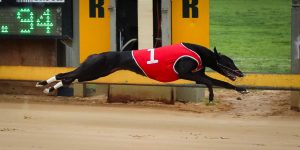 Trainer Ray Murray had a big day out at Gawler on Friday afternoon, when he achieved the perfect winning score from the three runners he had engaged.

Ray kicked off with a win in the very first race, an event for Grade 6 dogs over 400m. His runner Wan Chai from box 1, had to fend off a spirited challenge firstly from Stellar Jewel (5), and then Spofforth (2), before winning by four lengths in the time of 22.94 secs. Spofforth was second for Ben Rawlings and Stellar Jewel ran third Paul Bodsworth.

The second win came in race 7, a race for Grade 5 over the 531m trip, with his runner being Air Marshall from box 5. Air Marshall was headed at the start by several runners, which included Cosmic Katie which speared straight to the front. Air Marshall quickly got into top gear to go to the lead as they left the catching pen area, to pull away with a winning lead that was maintained until he crossed the line, nearly 5 lengths in front of his rivals. Running a sound 31.01 secs, he defeated Love First (1) for Tony Lagana and Aston Opal (2) for June Sharpe. Also owned by Ray, Air Marshall took his impressive tally to 18 wins, with 9 placings from just 32 starts

Aston Chandon provided the third winner in the trio when winning the next race, a Mixed Grade 3/4/5 event also over 531m. Jumping straight to the front from box 1, Aston Chandon stuck to the rails and won comfortably by just under 5 lengths, in a very fast 30.67 secs. Second place went to Instantaneous (7) for Ben Rawlings and Spring Cuervo was third for Ray’s son Troy Murray. Aston Chandon also has a better than average record, with his 38 starts yielding 15 wins and 11 placings.

Helping to keep it in the family was Troy Murray who produced a good win in a Mixed 4/5/6 over the 643m journey. Leading all the way from box 2, Defy did just that to not let his rivals get into contention with a 4 ½ length win. Second was Boom Down (1) for Ben Rawlings and Dracarys was third for Colin Swain. Defy has been an exceptional performer since coming to SA in Troy’s care, having 15 starts for 11 wins, giving him a career total of 29 wins from 59 starts.

Racing at Gawler is normally every Friday and Tuesday afternoon, but there will be another of our popular Sunday night meetings on Sunday 27th September, in lieu of Friday 25th. Bookings will be required, and can be made on 8522 2935.