RIDING THE WAVE OF EXCITEMENT 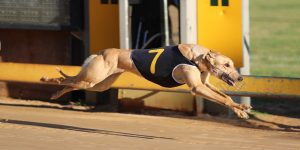 RIDING THE WAVE OF EXCITEMENT

On a very pleasant afternoon at Gawler greyhounds on Friday, the first three races on the program were the Heats of the Gawler 2020 Classic, run over the 400m distance. A paid up series for SA bred greyhounds whelped between July and December 2018, the Classic Final will be conducted next Friday.

The first Heat was won by Our Boy Wolf (4), which went straight to the front, but was then headed by Marlee Jaye (7,) who extended its lead out to 2 ½ lengths down the back straight. However, Our Boy Wolf slowly gained on the leader, and drew level in the straight, before saluting the judge with just half a length in hand. Our Boy Wolf ran a good time of 22.73 secs, and is trained by Brenton Prouse of Kadina.

Heat 2 saw diminutive greyhound Zinfandel Oompa lead all the way from box 7, at one stage getting out to a three length break over Chief Sebon (1). That was whittled back to just a length, with Zinfandel Oompa recording a winning time of 23.25 secs. Weighing in at 24 kgs, Zinfandel Oompa is also one of the youngest in the Series, giving away a few months of experience to some of her rivals. Zinfandel Oompa is trained at McLaren Vale by Gavin Harris, who is also a part owner with friends Stewart and Cherylee Barber.

Zinfandel Oompa was bred from their racing female, Zinfandel Zara, which unfortunately had its promising racing career cut short after an injury. This first litter from Zinfandel Zara by top sire Fernando Bale, was also the first to be whelped by Cherylee and Stewart, with them retaining four pups in partnership with Gavin. With Stewart employed in the wine services industry and also owning a vineyard, it was a natural progression to use Zinfandel, a grape variety, in the name, and the Oompa came from Stewart when he saw she was the largest of the pups at birth. Gavin said that Stewart and Cherylee are “riding the wave of excitement” that can come when you have success with your first litter, and be able to have a runner in a final.

The final Heat of the day went to the impressive Funambalist, which was able to lead the whole journey, defeating Australasian Art (2) by nearly two lengths in 23.07 secs. Trained at Williamstown by Jane McNicholl, Funambalist has a perfect winning record from those three starts at Gawler, for a career tally of six wins and six placings from 13 starts.

It all augers well for an interesting Final next Friday, which will see the Heat winners and runners up, competing for $3000 in stakemoney. So please join us for the Final on an interesting program, with racing also on Tuesday afternoon.