LIZ MOVES INTO THE FINAL WITH MARLEE JAYE 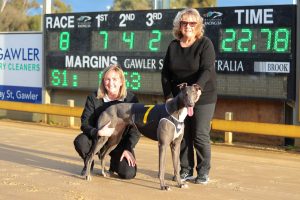 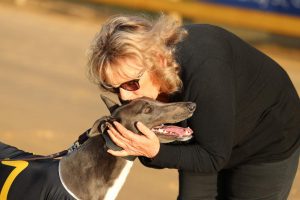 At Gawler last week, the Heats of the Gawler Classic were run, and this week saw the Final of the series.

Marlee Jaye gave her owner and trainer, Liz Harley a big thrill in winning, particularly as she had also bred the blue female as well. From a litter of nine that Liz whelped and reared, this was the first litter from her former good racer Australasian Tab. It was also special for Liz’s daughter Hayley, who shared the litter with her mother, with Marlee Jaye being named after Hayley’s daughter. Liz said that Hayley brings her luck and now has the boxing duties on race day.

Coming off a month’s spell, Liz is pleased with Marlee’s progress in her short career, even though she has some learning to do, in particular correcting a tendency to run wide. Marlee’s record now stands at two wins and three seconds from six starts.

Liz loves the dogs and showed that with an impromptu kiss for Marlee after the race, and said greyhounds are responsible for keeping her going. This was the first race in a series of special events that this group of dogs are eligible for, and Liz intends to compete in the other races, being confident that she can run the 515m distance at Angle Park.

Liz has been involved with greyhounds for over 40 years, and currently has some 26 dogs of various ages on her property. To be able to work with that number requires a lot of help, and she said that without the help of partner Tim Ieraci, she wouldn’t be able to do it.

Racing is on every Friday and Tuesday afternoon, so join us for a great meal and racing.