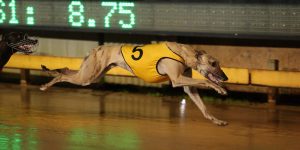 Greyhound racing made a welcome return to the night time slot for one week only at Gawler, on Friday night. Despite being a very wet and windy night, the meeting was welcomed by a large and enthusiastic crowd, while operating under COVID-19 restrictions. The meeting resulted from a one off opportunity to switch the normal Gawler afternoon meeting with Victoria, where city races cannot now be run at night, due to their restrictions.

Even though the weather conditions were not great, the meeting still provided some great racing action. Lachlan Mill, a new trainer to the ranks of racing, achieved an early success on the program when his greyhound, Uprise, bounced out well from box 5, to lead all the way, with a winning margin of a length, in 22.99 secs. That win was Lachlan’s first ever at Gawler and took his record to two career training wins, the other one coming with Uprise at his previous Murray Bridge start.

The only trainer to score a multiple on the night was Troy Murray, who landed a double which resulted from his all the way winners Super Blu in the 400m event, and Major Major in the 531m race. Super Blu, ran the second best time of the night of 22.67 secs, winning impressively by over eight lengths. Major Major also won well, with a margin of 5 ½ lengths, which took his career tally to a very respectable 14 wins and 8 placings from just 28 starts. Troy’s father, Ray Murray, also saluted with a winner, when extremely consistent performer Air Marshall won by 8 ½ lengths, to run the best time of the night of 22.63 secs, and take his tally to 16 wins and 8 placings from 29 career starts.

Promising young greyhound, Fly For Trix, made it five wins in a row, after showing his rivals a clean pair of heels, to win by nearly six lengths in the other 531m race of the night. Owned and trained by Jane McNicholl at Williamstown, the white and fawn dog has now recorded seven wins and two placings from just 14 starts.

Racing at Gawler reverts to its normal Friday and Tuesday afternoon schedule, and another of the popular night meetings will be held on Sunday 27th September.