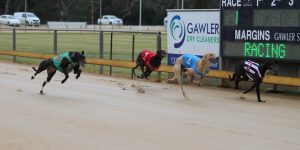 Last week we all delighted in the great weather at Gawler greyhounds, but on Friday afternoon it was cold and grey. However that didn’t deter an owner from enjoying his first ever visit to the Gawler track, where he was able to hared in the success of a syndicate greyhound.

In the first race of the day, a small field of four runners lined up for the Grade 5/6 event over the 643m trip. Tax Deduction from box 4 was the early leader, but shortly after Joint Interest (2) went to the front, only to see Shanlyn Haven (6) take the lead in the back straight. Shanlyn Haven looked to be going away with a handy lead but she has an unfortunate habit of running wide during her races, which saw her drift wide on the home turn, allowing Joint Interest back into contention. Joint Interest did hit the front, but In an extremely tight finish, Shanlyn Haven prevailed by a neck right on the line, in the hotly contested race. Joint Interest was second for Kim Johnstone of Two Wells, and Emerley Nera (1) was third for Vadim Roz of Moppa.

The winner is also trained by Vadim, and is owned by the Twenty Twenty syndicate, managed by Ashley Harvie. The syndicate of seven, which contains three first time owners in greyhound racing, has two racing greyhounds. One of those new owners is Matt MacDonald, who lives at Naracoorte, and therefore finds it difficult to get to the city to watch a race, and has never been to the Gawler track before. His wife Brooke was also at the track, and they were pleased to have had the chance to see a win on such a rare opportunity.

Shanlyn Haven was purchased from Victoria by the syndicate, and has shown some good form since arriving in February under Vadim’s care. “Tess” has now chalked up three wins and six placings from 15 starts, since moving to SA. Vadim has great faith that even with her wide running habit, Tess can produce a few more wins, particularly over the 600m distance, for the syndicate.

Racing is every Friday and Tuesday afternoon, and the public are welcome, while still observing COVID-19 restrictions. Please note that on Friday 21st August, it will be a night meeting, replacing the normal afternoon timeslot.