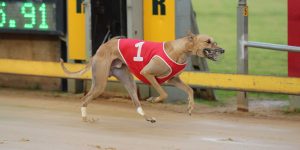 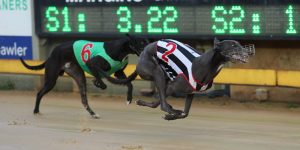 Friday 19th of June was the start of the Gawler Produce Stake for 2020. We held 4 heats in total this year with the semi finals being run this coming Friday 26th of June, the final being held on Sunday 5th of July.

The Gawler Produce is a prestigious race to win and ties into the Gawler Gold Cup later in the year where there is a bonus $10000 if the winner of the Produce takes out the Gold Cup in the same year. The Produce was first run in 1975 and continues to hold a huge amount of interest for the trainers and owners. The event is a “paid up race” with trainers nominating their greyhound during the previous year, to qualify they must have been whelped 2 years prior.

Heat 1 was easily won by Springvale Ortiz trained by Gavin Harris, the favourite Spring Vinnie out of box 4 jumped slowly and never really looked to be able to find its stride. Springvale Ortiz on the other hand jumped well and took the lead down the back straight and extended its lead 8 lengths winning in a time of 30.87seconds

Heat 2 was won by Jabari trained by local Neil Mann in a winning time of 30.98seconds. Jabari lead all the way and Spring Cobra trained by Greg Board finished 2nd in a time of 31.14.

Check out all the action on Sky 1 and 2