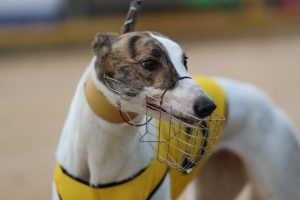 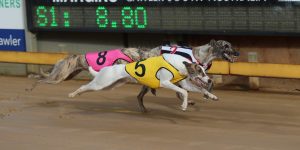 Floral Notes takes her Maiden Win at Gawler 8th May 2020

The First at Gawler was the Bunyip Maiden over 400metres and proved to be a good result for Don Turner with Floral Notes who won in a time of 23.35seconds. After 33 starts, which resulted in zero wins, seven second placings and eight thirds Floral Notes finally broke thru for her maiden win.

Lorentz jumped best but was passed by Ping Magic trained by Troy Murray. Floral Notes took chase after Ping Magic and ran hard to take the lead and win by a neck from Ping Magic

In a bittersweet twist her trainer for her first 33 starts, Derek Anderson , suggested to the owner a kennel move might be in Floral Notes, Ava’s, best interest.

Derek knew the little white and brindle girl had plenty of potential, but felt he was doing her an injustice racing her mainly at Murray Bridge against a higher level of maidens.

With Derek’s work taking up most day time racing opportunities, he thought day time racing at Angle Park or Gawler would be her go and she would pick up a win very quickly. Well you can’t get much quicker than her first start under the care of new trainer Don Turner.

Thanks to our new on track photographer Kurt Donsberg for the photo’s and some context to Floral Notes Win on Friday.

Gawler now returns to racing twice weekly being Tuesday day and Friday Twilight. All the action can be viewed on Sky racing. With the easing of restrictions there may be an opportunity for spectators to return to the races in the not too far future.