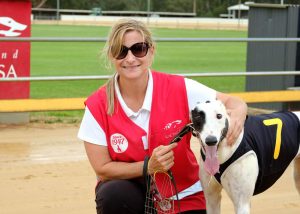 An unexpected win at Gawler greyhounds on Friday provided a bit of a lift for Two Wells trainer Kim Johnstone.

In a Grade 6 event over the 400m distance, Kim’s runner Nigel Lee started from box 7 and after an even start, he was able to cross the field, with Long Gully Terry (4) and Burnt Gold (8) in close pursuit. Nigel Lee was able to gradually extend his lead over the field, going on to win by 2 ½ lengths in the time of 23.08 secs. Long Gully Terry took second placing for Paula Hearnden of Angaston and Burnt Gold was third for Renata Maruszczyk of Lewiston.

After the race, Kim confided that she was not expecting to win, and was a little surprised at his effort, although “Nigel” has sometimes shown potential but not always produced that in races. “Where was he hiding that run”’ Kim said, after the white and black dog had produced his best time at Gawler. The win provided a bit of a boost for Kim, who said that last year had been her least rewarding in terms of winners in many years, but still with 41 winners. She is on a more promising course this year, with nine winners to date, helped along by Nigel’s win. Nigel is a member of a litter bred by her parents, Darrell and Kathy, a litter that had eleven pups, with ten of them winners.

Being a third generation greyhound trainer in the Johnstone family, Kim has been a trainer in her own right for over 20 years. Kim has a kennel of fifteen racing dogs, and while she does most of the work herself, she is grateful for the help she receives from Craig D’antonio, Bec McAuley-Fry and the “Hurley” girls, particularly at the track.

Kim loves the greyhound breed, and tries to do as well as she can while looking after all her animals. She likes the social aspects of the sport as well, and enjoys the atmosphere at the Gawler track, and Nigel’s win helped put a smile back on her face.

Racing is conducted at Gawler every Friday and Tuesday afternoon, so join us for great racing at the track.