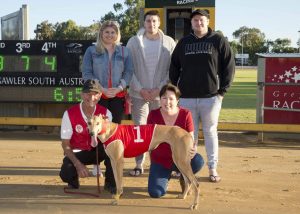 Sunday night racing retuned to Gawler over the long weekend, and a great holiday crowd enjoyed a good night of racing.

The feature event on the program was the Gawler Breeders Final, which is part of a paid up series for greyhounds whelped in the first six months of 2018. This race is one of several special races available to this group of greyhounds, and is contested over the 400m journey. Heats had been conducted the previous week, which means the Final brought together a very good field.

The public fancy for the event was Maddison Kaye, which drew box 1 in the race, and was able to jump away best, to lead as expected. However Dusty Divot (7) challenged for the lead, but after a short tussle, Maddison Kaye was able to maintain her position, although Dusty Divot was in hot pursuit. Maddison Kaye, by running a very smart 22.51 secs, made it a difficult task for the others, and went to the line with 3 lengths in hand. Long Gully Barny ran on well into second placing for Paula Hearnden of Angaston, and Dusty Divot was third for Matt Payne of Middleton.

The successful trainer was Des Hockley of Lewiston, who trains the fawn female for Debbie Stuppos of Whyalla. The training duties had previously been undertaken by Debbie’s brother, Graham Brown, but the travelling down from Wyhalla to trial and race was onerous, and consumed a lot of time that could be better spent on their pups. So the decision was made to transfer the training to Des, who has now achieved consecutive wins at Gawler in excellent times, from just three starts. Des and Graham have known each other for many years, so it was not a hard decision to make.

Debbie said that they had wanted to give Maddison Kaye every chance, with the greyhound having a great record of eight wins and three placings from just 13 starts, with 12 of those starts being at Gawler. Debbie wasn’t surprised at the two wins, but was ecstatic about the quick times. She confided that Maddison Kaye wasn’t ideally suited to box 1, as she takes a little time to settle in the field before she takes off, but it worked out well on the night.

The name Maddison Kaye comes from the name of the granddaughter of a good family friend who looked after their brood female for some time, which added a nice touch to their story. Debbie said the challenge was now to see how Maddison Kaye handles the 500m racing, but she hasn’t done a lot wrong to this point, so the future looks promising.

It is back to normal Friday and Tuesday afternoon racing next week, but there will be another Sunday night meeting on 22nd March.