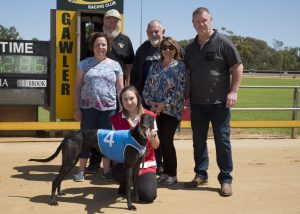 Things have usually gone pretty quiet when the last race is being run at Gawler greyhounds, but last week there was some spirited barracking instead.

The last race on the program on that Tuesday was a Grade 6 event over the 400m trip, and saw box 4 runner Missy Two Toes step away cleanly to quickly establish a two length break. As the race unfolded, the gap to the next greyhound increased to nearly six lengths, and Missy Two Toes had the race under her control. Although Dream Illalangi (7) made up some ground, Missy Two Toes was never in doubt, and went on to win comfortably by four lengths in a good time of 22.86 secs. Dream Illalangi was second for Vern Anderson of Kingston on Murray, and Stitch ‘em Eric was third for Chris Lennard of North Haven.

The winner is trained at Lewiston by Bob Isaacson for the Two Toes Syndicate, managed by Dave Sheppard. The syndicate consists of work mates Davie, and Mark Noble, along with their partners Mary Sheppard and Ruth Sheriff, who try to get to the track very time Missy Two Toes runs. The syndicate was formed after the friends thought it would be a good idea to race a greyhound, and Dave knew Angaston breeder Paula Hearnden. Paula had some pups available for sale at the time, and so one was selected, but they were also looking for a trainer. Paula suggested Bob Isaacson because of his training experience and “being a good bloke”, so Bob was contacted took on the role.

Missy Two Toes was named after the two white toes that she has on her otherwise black foot. Things have worked out well and she has now won six races, along with eleven placings from her 35 race starts. This win made it two in a row, with the previous one coming at Angle Park. Ruth said straight after the race that “it’s awesome”, to describe the excitement the group feel about having a winner. They enjoy the whole setup at Gawler, with friendly people and the ability to be close to the racing there. They find it family orientated and everyone seems to join in and have fun. As they are enjoying the experience so much, they are looking to have another greyhound in the syndicate.

Gawler races every Friday and Tuesday afternoon, so please join us for great racing and enjoy the action close up, Gawler style.