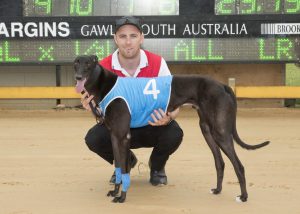 Black Rock, a greyhound owned by a public syndicate, won at it’s first race start at Gawler on Friday.

Jumping from box 4 in the $00m Maiden event, Black Rock was away very well to take an early lead from Cosmic Jenna (8) and Crazy Times (1), but then drew away to record a very convincing win. Black Rock crossed the line with 7 ½ lengths in hand, in a fair time for a first up runner of 23.19 secs. Second was reserve runner Sweet Sapphire, starting from box 5, for Nicole Price of Renmark, with Christopher Rose (7) running on well from the rear of the field to finish third for Gina Hall of Paskeville

Black Rock is another greyhound that is part of the National Greyhound Draft syndicates, and a member of the Team Rawlings, run by Ben Rawlings of Lewiston. “Sonny” was the final runner of the syndicate to hit the track, but is the first to win. Ben was happy with the run, particularly as it was Sonny’s first run with other dogs, and he acquitted himself well. The black dog requires a bit of extra attention as he sometimes experiences wrist issues, and for this reason, Ben considers he will go better at bigger tracks such as Murray Bridge. Ben expects that with further racing, Sonny will also handle the 500m journey, as he is bred to run that distance.

Ben was approached by the Victorian organiser of the syndication to participate. He jumped at the chance, as he recognised it was a positive for the industry in SA, providing great exposure opportunity for greyhound racing and also for himself. Unfortunately it has not been all smooth sailing for the syndicate, but this win provided some positivity. It has certainly generated interest among its multitude of owners, many of whom are first time participants, with a large number of photos of the win ordered.

Ben is a third generation trainer, and one of the more successful of the younger brigade in SA, having held a trainer’s licence for 10 years. Last year he trained 166 winners, which saw his winning career tally pass the 1000 mark, an achievement that also includes wins on the national stage. With about 30 greyhounds to attend to, Ben gets plenty of help from his father Neil, who was also a trainer in his own right, and other family members. Ben is positive about the syndication concept, and has participated again in the second draft, although he has limited it to just the one greyhound this time.

With racing at Gawler scheduled for Friday and Tuesday afternoons, please be aware that with the hot weather, race times and days may be subject to change.