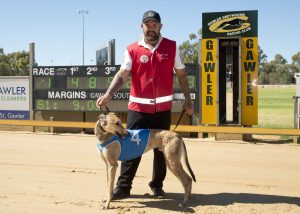 Darwin trainer Harry Brown scored his first winner in SA on Monday AT Gawler greyhounds, with his very first runner here, and in doing so may have created his own bit of history. Due to the expected heat at Gawler, the meeting had been moved from its normal Tuesday spot, to a cooler Monday morning.

In the first race, a 400m Maiden, Black Diesel hopped to the front from box 1, to lead Hurricane Storm (8). Burnt To Ashes (4) had begun well, before drifting back, but then got going on the rails. He made up ground quickly and hit the front near the 643m boxes, going on to win by 3 lengths. Second place went to Hurricane Storm trained by Steve Hoffman of Paralowie, with third spot going to Black Diesel for Ross Panagiotou of Evanston Gardens.

Without checking the records, there is a fair chance that this would be the first time that a Darwin registered trainer has ever won a race at Gawler, if not SA. The winning trainer is Harry Brown, who resides in Darwin, but has made many trips south in recent times. He will be moving permanently to Lewiston next week, but had to return to Darwin, and was consequently not at the track to savour the win.

Harry not only trains Burnt To Ashes but is also the owner of the fawn dog, which was bred locally by Ray Murray. Harry became acquainted with Ray’s son Troy, while Troy had been contesting a Darwin Cup event some years ago. He took the opportunity when it presented, to work on Troy’s property on several occasions, but has decided this time to move permanently to further his career. The advantage for Harry is the opportunity to work with a professional trainer, he said that the main learnings for him have been to pick up the ”one percenters”, and the need for quality control.

Harry’s interest in greyhounds stems from his father, who has been a trainer” off and on” in Darwin for many years. Harry started training in a small way in 2017, before getting more serious in 2018, and decided that if he was to pursue his interest, he would have to move elsewhere. Harry relishes the historical aspects of the sport, going back to when it was regarded as a noble sport, and finds it fulfilling, particularly working with such loyal animals.

Harry has now trained 28 winners in his short career, and will have one pup in addition to Burnt To Ashes in his care, when working with Troy. Harry is prepared to show some patience to hopefully obtain the best stock he can. Monday’s result was a good start to move to SA.

Racing will be at Gawler on both Christmas and New Year’ Eve, as well as on Fridays. Please check the times, as meetings may be alterd due to the heat.