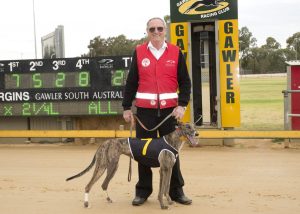 It is not that often that a father and daughter each train a winner on the same race program, but that happened at Gawler greyhounds on Friday afternoon.

In race 2, a Maiden 400m event, Pink Eight from box 5 hit its straps early to take the lead over reserve runner Mombasa Zac from box 1. With the field settling into order, Pink Eight maintained the lead, but had to contend with a further challenge from Mombasa Zac, which attempted to burrow up on the rails, and Burning Nitro (7) making up ground on the outside. On the home turn Burning Nitro drew on equal terms with Pink Eight, and after sustaining a couple of bumps in the straight, Burning Nitro got the upper hand and won by just under a length in the time of 23.37 secs. Second was Pink Eight, trained by Steven Brook, and Quick Burn (2) ran on well along to rails to finish in third spot for Renata Maruszczyk, both of Lewiston.

Burning Nitro is one of two race dogs that Don Gordon owns and trains at his Riverland property in Glossop. He inherited his interest in greyhound racing from his family some 30 years ago while living in Sydney, and Don believes he is the third generation to train. He recalls his first runner was a giveaway named Spider Moss, which he owned with his mate Frank, and from that time he has maintained his interest. After a recent break away from the sport, a request from his daughter, Nicole Price, “to rear a couple of pups” that she had bred, got him involved again.

Don said that he has always enjoyed greyhounds, and it was the thrill and accomplishment of a win that keeps him involved, despite having to travel a long way to race. However Don was philosophical about the travel distance and said that “winning the race again ten times on the way home, cuts 50 kilometres off the trip.”

In the penultimate race of the day, it was his daughter Nicole’s turn to taste success. Her runner, Hope’s Tribute from box 2, was initially headed by Tyson’s Choice (1), but was able to gain the ascendancy on the back turn, and retained the lead to win by nearly a length on the line. Second was Tyson’s Choice for Tony Lagana of Gawler and third was Goddess Of Love for Steven Brook.

Nicole now breeds her own racing stock, and has had her best year as a trainer and owner, recording 30 wins and 41 placings, a winning rate of 22%, despite having to travel from Renmark to compete. Along with Nicole and her husband Linton, they have become part of the fourth generation, and there is a good chance that it could continue to the next.

Be a part of the great racing action that happens at Gawler every Friday and Tuesday afternoon.