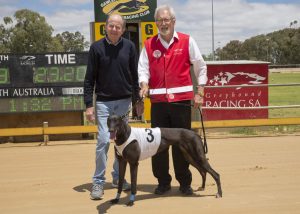 The Lewiston training team of Mike and Karen Wittholz had a great run at Gawler greyhounds on Tuesday when between them, they were able to land a treble in consecutive races.

The first winner was Stir Crazy, who won his 21st race, and at the age of four, was able to run his best personal time of 22.55 secs for his favourite journey of 400m.

The following race saw Bar Double get to the front only in the last 10 metres of the race, to encouragingly score his fourth race win after a frustrating string of minor placings, from 17 starts.

The third win came in the next race, when their runner Speed Crazy jumped mid field from box 3, to then pass early leaders, Oshkosh Wayne from box 1, Sleepwalk Dance (2) and So Foxy (8), as they approached the back turn. Speed Crazy went out to be two lengths clear, but Sleepwalk Dance stuck to his task and ran on stoutly along the rails, but went down by just under a length, to finish second for Con Haagmans of Marrabel. Third placing went to Justice Elite(7) trained by Ben Lowick of Seaton.

Speed Crazy is trained by Karen Wittholz and is raced by Gawler Committee members, husband Mike Wittholz, and Bob Taplin. Mike and Bob also are syndicate members of the other two winners, so it was a good day from that perspective too. Speed Crazy is having a purple patch at the moment, as this win was the sixth in a row, and the tenth in total from just 16 starts, which includes four placings. The black female is from a litter whelped locally by Richard Pearce and Narvette Treloar, and includes several dogs trained by them, and also today’s winner, Bar Double. Karen described Speed Crazy as being good natured, and a perfect kennel dog, but also importantly a hard chaser. Completing a good day for them, their only two other runners, Crazy Times and Miss Excuse, both ran second.

Two other trainers achieved multiple winners at the meeting, each going home with a double. The first was Wally Harkins of Reynella, who was successful with Lefevre Lill, which was followed in the next race by Mr Wally. Moppa based Judi Hurley had to wait until two of the last three races to get her double with Emerley Circuit and Emerley Fabbro.

As we head to the Christmas period, racing continues every Friday and Tuesday afternoon, which this year will include afternoon meetings on both Christmas Eve and New Years Eve.