MATES HAVE A WIN 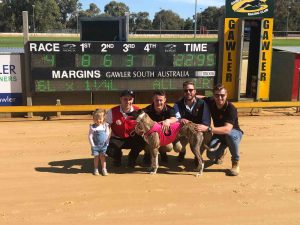 MATES HAVE A WIN

After a frustrating run of second placings, greyhound Regazzoni scored it’s second win a row with a win at Gawler on Thursday afternoon.

Jumping from box 8 in a Grade 5 event over 400m, Regazzoni was away well, but had to contend with a fast beginning Dakota Grace (1), with Be Perfect (7) and Hot Chevy (3) then taking over. It wasn’t until the back turn that Regazzoni was able to take the lead, but from that point on, Regazzoni cleared away to score a convincing 6 length win, in a handy time of 22.95 secs. Invictus Clive (6), which was last out of the boxes, ran on resolutely from the rear of the field, to take out second placing for Robyn Mackellar of Lewiston, with Hot Chevy third for Adam Manton, also of Lewiston.

Trained at Lewiston by Ben Rawlings, Regazzoni is a 3 ½ year old brindle and white dog owned by the Beach Worm Capital syndicate, managed by Tyson Panagiotou. The syndicate has six members, who are all mates that Tyson got together, and decided to buy their first runner. They sought out the help of leading trainer Ben Rawlings who sourced Regazzoni from Western Australia. The greyhound had its first start in SA in early September, running second first up at Angle Park. This was followed by another three consecutive second places. A switch to Murray Bridge at its next run provided the first win, but ironically none of the syndicate could make it on the night to witness the success. However at Gawler on Thursday, three of the team were on course to see the win, so they were very pleased with the result.

Tyson was introduced to greyhounds through his grandparents, Ross and Rosa Panagiotou, who also own and train a small team. He has wanted to get involved for a long time, so the syndicate was ideal for everyone. They are all enjoying their introduction to the sport and looking to purchase another runner, with the object of having a greyhound capable of winning on a Thursday night at Angle Park. The syndicate consider that greyhounds offer a value for money proposition, and are great for a group of mates. If “Ralph” can continue with his current form, they will certainly have plenty to enjoy.

The racing schedule reverts to its normal Friday and Tuesday afternoon meetings, and don’t forget the 2019 Gawler Gold Cup coming up on Sunday night 3rd November.