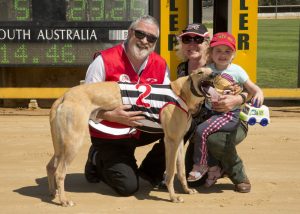 His first winner, McAlpine, came in race 9, a Grade 6 event over $00m. Drawn in box 5, McAlpine was last on settling. However a sustained run from that point saw McAlpine continue to make ground, to hit the front as they left the back turn. Keeping the momentum going, McAlpine drew away, to win by nearly four lengths in a good time of 22.99 secs. Gotta Maggie (7) was second for Tony Fry of Lewiston and Maximus (2) third for Don Turner also of Lewiston.

John’s next winner came up in the next race, another 400m Grade 6 event. Jimmy Peruzzi from the 1 box jumped best, and got away to a three length break over Dusty Divot (2) in the back straight, but from that point, Dusty Divot started making up ground on the leader. Dusty Divot really applied the pace in the straight and was able to pass the leader, with 1½ lengths in hand on the line. Second placed Jimmy Peruzzi is trained by Yvonne Maxwell of Whyalla Norrie, and Spring Catch was third for Greg Board of Murray Bridge.

Dusty Divot is trained by John Cunningham, and he races the fawn dog in partnership with Matthew Payne and Andy Peden. Surprisingly the name, Dusty Divot, has nothing to do with golf, but was named by Matthew’s son from a digital game. The victory brought up Dusty Divot’s second career win from 10 starts, and completed John’s first ever training double. He was pretty pleased with that achievement, which partner Evie thought was well deserved, as John not only put in a lot of effort, but had bred, reared and trained the litter as well. These two wins took John’s tally to five for the year, all at Gawler and all in the last few weeks,

The Gawler Gold Cup will be contested on Sunday night, 3rd November, so join us for our premier night of racing. Extra activities for the children, extra food will be available on course, as well as the dogs from the Greyhound Adoption Program.