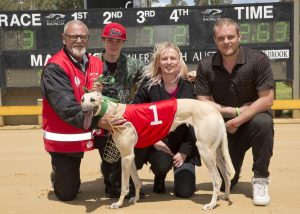 On Friday afternoon at Gawler greyhounds there were several fast runs recorded for the day, with the first of those coming up in the Juvenile Stake over 400m.

In that event, Calais Peruzzi was very fast away from box 8, and was able to cross to the rails, to lead Maddison Kaye (7) and Golden Kruger (1). Down the back straight, Maddison Kaye quickly challenged for the lead, and after drawing level with Calais Peruzzi on the back turn, was unable to sustain the run. Golden Kruger was sitting on the rails behind the other two, and when the opportunity presented she accelerated through to take over the running, going on to win by over five lengths, in a fast time of 22.63 secs. Second was Calais Peruzzi for Yvonne Maxwell, and Maddison Kaye was third for Graham Brown, with both trainers coming from Whyalla.

Golden Kruger has shown a liking for the Gawler 400m races, and has now won three races and a second from four starts there, for trainer Paul Bodsworth. The fawn female is owned by Bronwyn Welsh from Mildura, and was sent to Paul at 12 months of age to prepare for racing, and then to train.

Paul is based at Rhynie in the Clare Valley and has only a small racing team, but also has seven pups, some approaching racing age. It is working with the pups that Paul has his main interest, as he considers it paramount to handle the greyhounds from an early age. He believes that this contact with the pups, produces a calmer greyhound in the long term, which is easier to educate and have the opportunity to succeed. He is helped in this regard by his wife Marion, and the whole family pitch in to make it easier. With 35 years in the sport, Paul still enjoys it, especially the rearing.

It was a day of multiples on Friday, with Steven Brook setting the pace winning the first two races with littermates, Goddess Of Love and They Call Me, both winning at their first starts.

Troy Murray then went one better by taking out a consecutive treble with Wild Marilyn, Exciting Times and Mulla Mulla Girl all winning.

Equalling that good result was Nicole Price, who made the trip down from Renmark, to have Up Time Girl, She’s Hope and Previous Miracle win.

To round all that out, Angaston based Paula Hearnden finished the day on a high note winning two of the last three races with Long Gully Keith and Long Gully Boy.

Terrific racing continues at Gawler every Friday and Tuesday afternoon, when you can enjoy close up action, and a great meal.