BACK TO BACK CUPS 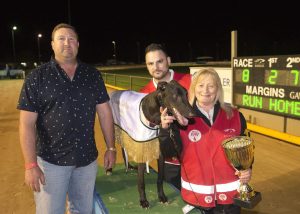 BACK TO BACK CUPS

In a great night of racing, prominent SA owners Tim Aloisi and Matt Lehmann took out the coveted Gawler Gold Cup, winning for the second time on Sunday night.

The prestigious Cup Final, run over the 531m trip, attracted a very even field from the five qualifying races that were run on Tuesday afternoon. Allinga Jess stepped away smartly from box 5 to cross over and lead over reserve runner Kisses For Cloda (from box 6), and Awesome Catch (2). Down the back straight, Allinga Jess moved off the rails slightly allowing Awesome Catch to push through and take up the lead. Awesome Catch continued it’s run, to go on and win with a handy 3½ length margin, in the very good time of 30.56 secs. Second was Immediate (7), trained by Deborah Coleman from Lara in Victoria, and third went to Axel Footluce (1) for Ken Trowbridge of Park Holme.

Awesome Catch is also trained at Lara by Rob Camilleri, who is Deborah’s partner, with Deborah making the long trips over to trial, qualify and run in the final. The result was a quinella for Tim Aloisi and Matt Lehmann, who own Awesome Catch together, and also share in the ownership of Immediate with friends Damien Bates and Mick McSorley.

Tim and Matt purchased Awesome Catch about 10 weeks ago, after the dog had not raced for about 10 months. They purchased the dog to compete in the Million Dollar Challenge, run recently in Sydney, where the dog acquitted himself well to reach the semi finals. The greyhound was then prepared for the run in the Gawler Cup, with Tim describing Gawler as his favourite track. Tim and Matt had not won the prestigious Gold Cup prior to last year when Honcho Monelli won for them, and they were keen to follow up on that again.

The duo has a large team of 14 racing dogs, and 20 pups as well, both in SA and Victoria. Tim treats it as a great hobby, which he really looks forward to, in what he calls a challenging sport. He finds it exciting to be a part of, and considers it a privilege to be able to contest and win feature events.

Deborah is no stranger to Gawler, having raced there on many occasions over the years. Tim’s relationship with Rob and Deborah has flourished after he had originally acquired another dog from Deborah, which she trained for him, and the association has continued to develop. It has certainly proven to be a fruitful arrangement, as shown by Sunday’s results.

Racing continues at Gawler every Friday and Tuesday afternoon, so join us for great, up close racing action.