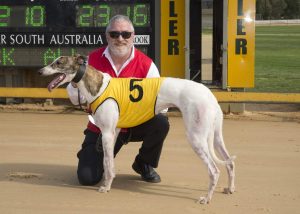 In the 400m Maiden event, John had McAlpine engaged, starting from box 5. Down the back straight, reserve runner Hopey Girl from box 8, showed early dash to take a two length lead over Punk Star Rocks (2), with McAlpine close behind. Approaching the back turn, McAlpine increased the tempo, and drew level as they passed the 643m boxes. McAlpine continued the run, to be two lengths clear at the finishing line, in a fair time for a maiden of 23.16 secs. Red Aramis (1), which had been travelling midfield, also accelerated down the back straight and with a good run on the rails, finished second for Don Turner of Lewiston, with Punk Star Rocks in third spot for Paul Fagan of Calomba.

McAlpine was having its second run for trainer John Cunningham, who races the white and brindle dog in partnership with long time mate, Andy Peden, formerly of Whyalla and now living in Queensland. The pair raced the dog’s mother, Mrs Bubbles, with great success and they decided to breed this first litter with her. A second pup from the litter, Cardhu Too, had won at Gawler on the previous Tuesday, and there is a third unraced pup as well. John also had success at the previous Friday meeting, with Dusty Divot, who is from In A Bottle, a litter sister of Mrs Bubbles.

John has now trained three winners the last two weeks, a feat he has not previously accomplished. He has achieved much success as an owner, but most have come under either the care of Andy Peden or Matthew Payne. John thought that it was an extremely long time since he had trained any winner, but the records show that he trained his last winner in 2012, not as long ago as he had imagined.

First involved in 1985, John now has a small team of four racing dogs and two pups at his Gawler Belt kennel. John said that “you can’t not enjoy the feeling of winning,” but he derives the most satisfaction from the complete circle of selecting the sire, whelping and rearing the litter, together with the education, racing and the eventual adoption phase.

With the Adelaide Cup being run at Angle Park on Friday night, Gawler will now race on Thursday afternoon instead of Friday, and again in the normal Tuesday afternoon timeslot.