TRAVELLING IN THE FAST LANE 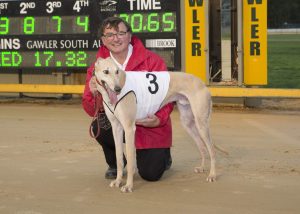 TRAVELLING IN THE FAST LANE

Lewiston trainer, Steven Brook has a relative newcomer in his care which is setting the track alight in SA, and had its second Gawler win on Friday afternoon.

Race 8 on the card was a Mixed 2/3/4 Grade event over the 531m trip, and Jervois Bruit from box 1 got away to a flying start to lead heading past the finish line the first time around. However Jervois Bruit was unable to hold off Road Travelled (6), which quickly went to the lead entering the back straight and opened up a convincing five length break by the home turn. Spirit Of Pop (8) finished on well to make up good ground, but Road Travelled was too strong and won by nearly four lengths in the time of 30.65 secs. Spirit Of Pop was second for Angela Modra of Gawler River, and Shot Thru (7) ran third for Kevin Bewley of Lewiston.

Steven trains the light fawn dog for the El Dorado Dreamers, a syndicate based in NSW. Road Travelled arrived in SA in June, with three wins from 18 starts. Since running fifth at Murray Bridge at his first SA start, Road Travelled has now won ten of his next twelve starts under Steven’s care, which is a fantastic achievement. Steven has had an ongoing relationship with the syndicate owners, who have sent two prior dogs to him, including Magic Begins which is from the same litter as Road Travelled. Magic Begins, has had five wins with Steven, who now also has another two racing from that litter. But it is Road Travelled that has set the track alight, creating a track record at Murray Bridge over 395m, and last week running a very fast time of 30.36 secs over 531m at Gawler, where the record is 30.23.

Steven put the improved performance down to “Ryder” having matured, and now able to ride out a race bump. With Road Travelled in such good form, Steven is seriously considering having a crack at the upcoming Adelaide and Gawler Cups, and in the dog’s current form, why not?

Lewiston trainer Troy Murray also produced a very fast runner for the day, with Wild Marilyn recording a win in the Juvenile 400m event of 22.53 secs, to blitz the field by over 9 lengths. The black female has only had seven starts but has scored three wins and four places in a promising opening to her career.

Racing continues at Gawler every Friday and Tuesday afternoon, so join us for great racing action.

Steven has 16 race dogs in work aloves the task, as he enjoys working with dogs.