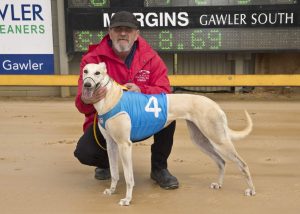 Two Wells trainer Marcello Calicchio is probably having his best season as a trainer, and added another winner at Gawler greyhounds on Tuesday.

In a Grade 5 400m race, Marcello’s runner, So Si Bonne, jumped straight to the front from box 4, to set up an early lead of three lengths from Taylor Jayde (7) and Sharp Catch (1). So Si Bonne was untroubled until they entered the home straight, having to contend with a fast finishing Aberlour (2), but still won by nearly two lengths in a good time of 22.99 secs. Aberlour was second for Kim Johnstone of Two Wells, with Louie Vee (3) finishing third for Tyson Bradley of Meningie.

The trainer and owner of So Si Bonne, Marcello Calicchio first became involved in greyhounds about 20 years ago, due to his interest in thoroughbred racing. He was introduced to greyhound racing by Fred Versari, a trainer at the time, and started as an owner, before becoming a trainer on an “on and off” basis, some 10 years ago.

Marcello has three greyhounds racing and seven retirees as pets to keep him busy. With a philosophy of liking to give a dog another chance, Marcello’s kennel consists of greyhounds that other trainers have transferred to him. So Si Bonne is one of those, and was sourced from his good mate and fellow trainer Paul Fagan, who has also provided advice along the way. So Si Bonne has now recorded 11 wins and 22 placings from 72 starts, the majority of those coming while in Marcello’s care. While those wins have all been over the 400m trip or less, Marcello is considering giving the fawn female a try over the longer journey.

With a general liking for animals and other varieties of dogs, and receiving plenty of help and advice from other industry members, Marcello is enjoying his time in greyhound racing. With only a small team, he has had a good year with seven winners and 26 placings so far.

With the Gawler Show now finished, greyhound racing at Gawler will resume in its normal Tuesday and Wednesday afternoon timeslots, so join us at the track for great racing.