A KEEN EYE ON BREEDING 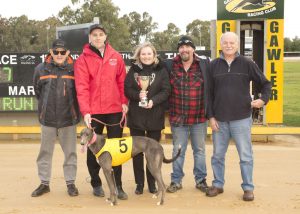 A KEEN EYE ON BREEDING

The Final of the 2019 Gawler Classic, an event for SA bred greyhounds whelped in the second half of 2017, was conducted on Friday afternoon.

With two Heats being run the previous week, the field for the Final over 531m looked pretty even on paper, with plenty of possible outcomes. Stiff Upper Lip (7) and Miss Takiri (5) got away on equal terms to lead, but on leaving the home straight, Emerley Hummer (8) swept past, opening up a three length gap over Miss Takiri. Heading to the back turn, Miss Takiri gradually wore down the leader, and entering the home straight, drew away to win by nearly two lengths. One of the heat winners, Double By Design (4), and Balboa Fury (3) both ran on from well back to grab the minor placings. Second placed Double By Design is trained by Sharyn Gray of Lewiston, and Balboa Fury who finished third, is trained by Tony Hinrechsen of Monarto South.

Miss Takiri is trained at Lewiston by Ben Rawlings for owner Gino Grgurovic. Gino and his wife Di, were very pleased with the win, and it had a special meaning, as they had bred the litter that contained Miss Takiri. “Feisty” was bred by Gino from his former racer Miss Woods, who was successful over the longer journeys. He had been waiting for the right stud dog, and felt that SA champion Worm Burner was the right choice. His judgement looks spot on, as Miss Takiri is a model of consistency, having now won five races with five placings from a career eleven starts. Miss Takiri is one of nine pups in the litter, with all of them having raced, and two contesting Group races in Victoria. Di said she had been confident of a good run today as the blue female has been racing well, but got into trouble at the start of last week’s Heat, nearly coming down on her nose.

Gino has been a trainer in his own right since 1986, but due to recent working commitments, he sought out a trainer, selecting Ben for his SA based dogs. The Grgurovic’s have now bought a property at Lewiston with the intention of breeding and rearing, and Gino is still thinking whether he wants to get back into the training game. Di said that she really enjoys the experience of rearing their own litter, through to racing, and knowing each dog’s strengths and character. They were grateful for the excellent rearing of the litter by Lester Harris and Ray Fewings.

Racing is conducted every Tuesday and Friday afternoon, so join us for great afternoon of racing.