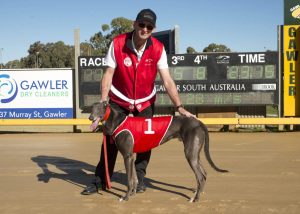 A greyhound found success in his first start at Gawler greyhounds on Friday afternoon, for trainer Graeme Stirling.

In the first event on the program, a Maiden over 400m, Another Clanger shot out of box 2 to take an early lead over Dorrigo McLaren (4) and Peruzzi Boloney (5). Heading around the back turn, Another Clanger had a length break, but Peruzzi Boloney was rapidly gaining ground, and momentarily hit the front, only to have that position taken from him by Beulah McLaren (1) which had wisely stuck to the rails. Beulah McLaren kept the momentum going and went on to win by just over 2 lengths in a good Maiden winning time of 23.15 secs. Littermate Dorrigo McLaren got clear to run on well for second placing, and Peruzzi Boloney finished third for Yvonne Maxwell of Whyalla Norrie.

Beulah McLaren is trained by Graeme Stirling at Two Wells for owner Don Foster. Graeme’s wife Michelle Hague, whelped the blue dog for Don and Helen Foster, and was bred from their successful racing female, Zara McLaren. As a result, Don then offered Graeme the opportunity to race the two dogs, for which Graeme is very appreciative. Beulah McLaren has unfortunately had some minor injuries that have taken Graeme several months to get right, preventing him from hitting the track earlier.

Graeme has been involved with greyhounds for over 40 years, and took up the interest following his father’s participation as a trainer when they lived in NSW. Graeme has five dogs currently racing and a number of pets that are looking to get into the Greyhound Adoption Program. Graeme considers greyhounds to be a great sport to be in, enjoying the challenge and the sense of achievement when able to get his dogs to do their best at the track. All trainers require help to be successful, and Graeme is very grateful for the assistance he receives from Michelle, and his teenage son James, who is particularly involved with his own runner, Emerley Star.

Racing is at Gawler every Friday and Tuesday afternoon, so join us for great racing at the track.