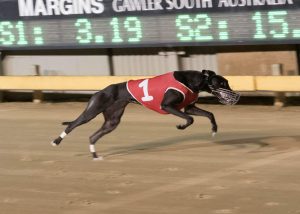 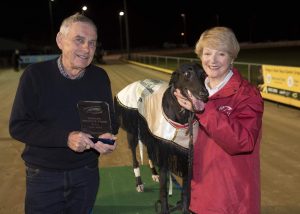 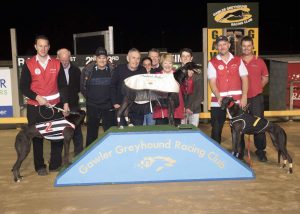 Eden Valley trainer Jan Jones, claimed her second Gawler Produce Final in three years, when her runner Star Anise was able to comfortably win the event on Sunday night. First run in 1975, the Produce is a “paid up” Series conducted over three weeks, and was this year’s was restricted to greyhounds whelped in 2017.

Star Anise drew the coveted box 1 in the 531m event, and used it to full advantage to lead from Stitch’em Cilla (7) and Oakvale Beauty (2), as they ran out of the straight the first time. Star Anise then showed her rivals a clean pair of heels to open up a big break. Star Anise was never challenged and maintained a handy break to the wire, winning by six lengths and recording her personal best time of 30.70 secs. Stitch’em Cilla ran second for Clint Trengrove of Lewiston and Oakvale Beauty was in third place for Nathan Wilson of Pinnaroo.

Star Anise is trained at Eden Valley by Jan Jones and raced in partnership with her husband Tony. Known as “Tilly” in the kennel, she was obtained from a breeding deal with long time Victorian racing friends Merv and Kay King. Jan and Tony were very keen to take the pups, as they were bred from a front running, city winning female in Melbourne. They secured a pair of pups at three months of age, and then reared them through to the education stage, before also taking on the training duties. Unfortunately the other pup was unsuccessful and is now a pet on their property, but Star Anise showed a lot of ability, with a results record now of nine wins and six placings from 19 starts. She has a great record at Gawler, with three wins and a placing from five starts there, and a career perfect score from four starts out of box 1.

Jan said that she has learnt in racing that things don’t always pan out as you think, and that with such a good field, it was very important in this race for Star Anise to lead. Jan and Tony enjoyed the win, which sees their record in this great event go to two wins, also taking out the 2017 Series with Dream A Little. As a result of the win, they were getting plenty of encouragement to breed from Tilly after retirement, so it will be interesting to see if they take up the challenge.

Racing is back to every Friday and Tuesday afternoon, so join us for great racing action at Gawler.