A PAIR OF EIGHTS 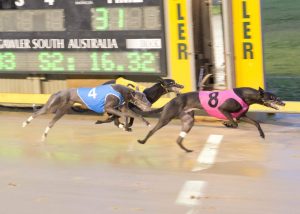 A PAIR OF EIGHTS

Lewiston trainer Troy Murray was the only trainer to score a double at the Gawler greyhound meeting on a very wet and cold afternoon last Friday.

Hi first winner for the day came up in the very first race, a Maiden event over the 400m journey. Troy’s runner was Tatachilla, which was drawn in box 8, and was able to contest the early lead, before being hampered in the back straight when looking to hit the front. Tyson’s Reward (1) momentarily took the lead, but Tatachilla took back the ascendancy, with Peruzzi Boloney (4) strongly challenging on the outside. After a neck and neck battle as they entered the straight, Tatachilla won the contest and went on to win by ¾ length. Peruzzi Boloney finished second for Yvonne Maxwell of Whyalla Norrie, and Victa Libby (5) ran on well from back in the field to also not finish far away in third spot for Michael Giniotis of Two Wells.

Troy’s next winner, Exciting Times, in a Grade 6 over 531m, also jumped well from the 8 box, but was unable to cross over the two inside runners, Long Gully Terry (box 1) and Blue Wolf (4), as they navigated the first turn. The battle continued down the back straight, with Exciting Times racing on equal terms with Blue Wolf until half way down the home straight, when Exciting Times took the lead when it mattered most, to win by a length. Victa Nash (5) rattled home to take second spot for Michael Giniotis, and Blue Wolf battled to the end to finish third for Steven Brook of Lewiston.

Kingston on Murray trainer Vern Anderson picked up his second win at Gawler in a couple of weeks, when outsider Dream Illalangi showed her rivalsa clean pair of heels to win strongly by three lengths, from Calais Peruzzi (7) for Yvonne Maxwell and, and Come On Leyna (2) for Vadim Roz of Moppa. A winner certainly makes the long trip from the Riverland a lot easier.