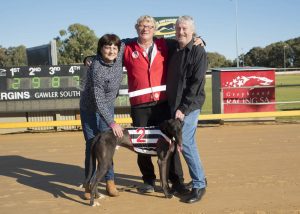 The next race, also a 400m Maiden, saw Yeah Nah Gary (2) go straight to the front and after an early tussle, was able to shake off She’s Mini Winny (9), going on to win with the convincing margin of just over six lengths. She’s Mini Winny maintained second spot for Leanne Fagan of Calomba, with Puma Country (8) third for Bob Isaacson of Lewiston.

Firecracker Miss and Yeah Nah Gary are trained at Owen by Gary Pidgeon, and raced in partnership with his wife Michaela. These two winners are the first two to race from a litter of eight that were bred by Gary. Their mother is his own La Nina Lady, which traces its line back to the second greyhound that Gary ever raced, named Universal Lady, which was a very successful greyhound, winning 32 races from 87 starts.

Gary wasn’t expecting a win with either dog today, as they were both coming back from a short break after injury, and needed a few runs .He had however noticed that there had been a general improvement as they mature, and gain experience. Yeah Nah Gary had copped a big bump at his first start, and has taken time to find his feet, but Gary said he was pleased with the big improvement he had shown today.

Gary started training at a youthful age in 1981, but gave it away for a while, before resuming about twenty years ago. He has about twenty greyhounds in work, and is ably assisted by his wife Michaela, who trained her first winner in her own name, a month ago. Gary supports the new greyhound racing format known as G Six racing, which has a field of only six runners, particularly for young greyhounds, , and is currently being trialled in SA.

At the track for the first time were Gary’s friends Owen Parker and Valerie Black, who both hail from Owen as well. They certainly picked a good day to do that, witnessing Gary’s double, and Gary is introducing them to the sport through a racing syndicate. Gary had a great record for the day with his two winners from as many starters, but he did recall that his best effort was three from three. It would be great to be able to do that every week!