SOMETHING TO CHEER ABOUT 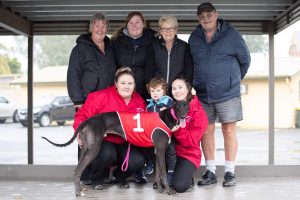 SOMETHING TO CHEER ABOUT

There was a bit of barracking from one table for one of the runners at Gawler greyhounds on Tuesday afternoon.

The greyhound attracting this encouragement was Kohen’s Kist, which was in the first Maiden event for the day over the 400m trip. Jumping well from box 1 to take an early lead, Kohen’s Kist was then quickly headed by Long Gully Simon (6), who was able to get out to a length break, but was not able to shake off the tenacious Kohen’s Kist who was in close pursuit. Rounding the home turn, the two were on level terms and that is when the urging started, with Kohen’s Kist going on to win by just under a length. Second was Long Gully Simon for Paula Hearnden of Angaston, while in third place was Come On Leyna (8) for Vadim Roz of Moppa.

With a very heavy track, Kohen’s Kist winning time, like many others on the day was not fast, but the win brought a lot of joy to the winning trainer, Kiah Hurley, and her band of supporters. This was Kohen’s Kist’s 24th start without saluting the judge before, so when the black dog was in a winning position, it sparked Kiah’s supporters to urge the dog on. Kohen’s Kist was bred, reared and broken in by Kiah, who described the run as a “battling win”. Kiah had faith that the black dog would eventually win, but was never confident when that might be.

The dog is named after Kiah’s two year old son, Kohen, who loves the dog, and is already walking a couple of dogs around at home. The “Kist” part of the name comes about from Kiah’s grandfather John, who raced dogs under that name with his late brother Peter. It is a real family affair with Kiah’s sisters Jasmyn and Jayde, and her grandparents John and Kathy, all helping each other at the kennels and at the track. Kiah who likes to breed a litter or two, has seven racing dogs and her sisters another four. It is the love of the greyhounds that keeps Kiah involved, and the family support is a big help. Despite having their own dogs, Kiah and her sisters are always at the track and find time to help out other trainers.