FIRST SHOT AT THE PRODUCE 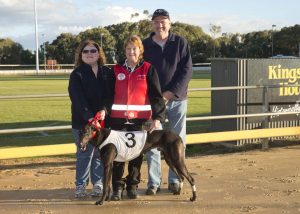 FIRST SHOT AT THE PRODUCE

The first Heats of the time honoured Gawler Produce series was run at Gawler greyhounds on Friday afternoon. This is a paid up series for greyhounds whelped in 2017, and consists of the Heats, followed by Semi Finals on 28th June and then the Final to be run on Sunday 7th July.

Heat 2 saw Allinga Mal (3) race to the front when able to head Victorian visitor Quara’s Flick (1) heading into the back straight, and going on to win by 2 ½ lengths in 31.12 secs, with Vermouth (2) third. The winning trainer was Yvonne King, with Deb Coleman second and Lauren Harris third.

The third Heat was the fastest of the three, and saw Star Anise (1) lead after the first turn, and was untroubled in the run to win nearly 4 lengths in 30.90 secs, from Oakvale Beauty (7) and Fly For Fun (4). The winner was trained by Jan Jones, with the second placed greyhound trained by Nathan Wilson, with the third runner by Lauren Harris.

The owners of Allinga Mal were pretty happy after the race, as it was the first time they have entered the Series, plus landing a winner. Trained at Langhorne Creek by Yvonne King, the black dog is raced by Trevor and Tracey Davey, and Les and Barbara Rogan. Trevor and Tracey bred the dog, the first litter from their own female Allinga Dot. The dog has strong emotional significance for the connections, as it was selected by Yvonne’s late father Wal and named after Barbara’s late father Mal. His racing name was easy as “Mal”, with a kennel name of “Wal”.

Trevor and Tracey have been involved in the greyhound industry for about nine tears, getting started through Tracey’s family interest in greyhounds and horses. They currently have three racing dogs, plus some interest in syndicates, as well as pups and a few breeding females. As for Allinga Mal, Tracey is not always quite sure what he will do in a race, but described him as a real character, who loves attention. With a bit of luck, perhaps he can make it through to the Final, which would be a big thrill to connections. He certainly has the opportunity, with a record of eight wins and seven placings from 18 starts.

Racing at Gawler is every Friday and Tuesday afternoon, but due to the ProduceFinal , the normal Friday meeting on 5th July will be transferred to Sunday 7th July.