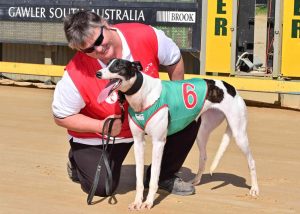 Angaston trainer Paula Hearnden ended up with a nice surprise at Gawler greyhounds on Tuesday afternoon when she landed a double.

Her first win came in the first race on the program, a Maiden event over the 400m trip. Tullabung Missy from box 8 momentarily led before Long Gully Terry (8) crossed over, and after a short tussle sailed away to an easy victory. Long Gully Terry ran an excellent maiden winning time of 22.86 secs, 5 ¼ lengths ahead of Tullabong Missy which ran second for Kevin Murnane of Lewiston, with Yeah Nah Gary (3) in third place for Gary Pidgeon of Owen.

Paula didn’t have long to wait for her next win, which came in the next race, which was also a 400m Maiden. Her runner, Long Gully Jayne started from box 6, and was a long way back after the lids went up. The early leader, Georgia McBain (1), was able to miss a tumble back in the field, but had to contend with Bangor Doll (4), which got through on the inside. But then Long Gully Jayne, which was winding up along the rails, pushed through and ran away for a commanding win by nearly seven lengths, in the time of 23.39 secs. Second placed was Firecracker Miss (7) for Gary Pigeon, with Georgia McBain third for Raye Kelly of Lewiston.

Paula had a third runner engaged for the day, which was Long Gully Helen. After a promising start, Long Gully Helen copped a bit of interference, and Paula had to settle for a fourth position in the race which was won by Isla Maye for Kevin Bewley of Lewiston.

All three greyhounds are owned as well as trained by Paula, and despite the two winners both running second at their only previous start, she was a little surprised that they were both able to improve to that extent this week. Paula has now bred many successful litters in her career, mainly following the breeding lines established by her late father, and all carrying the” Long Gully” prefix.

Following the Easter period, racing returns to the normal schedule with the normal Friday and Tuesday afternoon racing.