A MOVE TO THE COUNTRY 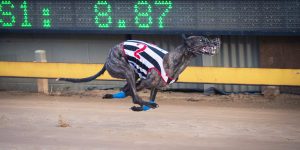 A MOVE TO THE COUNTRY

One of Judi Hurley’s greyhound racing team, Emerley Mee Too, enjoyed another win at Gawler on Friday afternoon.

Emerley Mee Too was engaged in the Open event, run over the 400m journey, and was amongst the early leaders. Steel from box 4, momentarily led from So Si Bonne (8), which then briefly hit the front before a tightening in the field saw well positioned Emerley Mee Too take over. Emerley Mee Too kicked away to open up a handy break, before winning in untroubled fashion by nearly 5 lengths. Steel, which has become something of a track specialist, had to settle for second position for Ray Murray of Reeves Plains, with So Si Bonne running third for Marchello Calicchio of Two Wells.

Emerley Mee Too is raced and trained by Judi Hurley, who also bred the dark brindle female. The December 2015 whelping has only had 24 starts due to intermittent wrist issues, but has shown plenty of ability to record 10 wins and 7 placings. Judi initially sent “Flash” to Victoria to race, as there were straight track opportunities to race, which did not involve turns that restricted her running. Judi decided to return her to SA after a racing fall, as she felt Flash would be able to handle short distance racing, with limited turns. That has proven to be the case, with Emerley Mee Too showing a liking for the Gawler 400m distance, with three wins and a third coming from her six starts there. Judi thinks that she will only race at Gawler over this distance, with an option to race at the new Murray Bridge straight track, when that becomes operational.

Judi has only recently moved to Moppa, near Nuriootpa, after running a large greyhound property at Two Wells. Judi is enjoying the new facility, particularly the downsizing to a more manageable property and the pleasant environment. Having installed some new kennels for her 20 racing dogs, some pups and the retirees, everyone is enjoying the change. Judi is fortunate to have a lot of support from trainer Vadim Roz, who now drives the dogs to the track, allowing Judi to remain at the kennels to do all the feeding and training duties. The arrangement is obviously working out well, as Judi has had a bit of extra success in recent weeks.