With a hot day forecast at Gawler greyhounds on Friday afternoon, the meeting was moved forward to the morning, with a very early starting time of 9.45am, to take advantage of the cooler morning. Local trainer Don Turner narrowly missed out on a win in an early race, but was rewarded with a win in the final event.

That race was a Grade 5 event over the 400m trip, which saw Dynamo Jezz from box 4 and Filthy Phantom (5) vying for the early lead, from Aberlour (1) on the rails. Dynamo Jezz was able to slowly assert his authority and grow the margin out to three lengths as they crossed the finishing line, running an excellent time of 22.65 secs. Filthy Phantom ran its fastest time at Gawler to grab second spot for Tony Hinrechsen of Monarto South, with Aberlour finishing third for Kim Johnstone of Two Wells.

Dynamo Jezz is trained at Lewiston by Don Turner and owned by his wife Gail. The black dog had raced at many Victorian tracks, before being purchased by Don and Gail in April 2018. Don enjoyed immediate success at the dog’s first start in SA, and to show it wasn’t a fluke, the dog scored a further three wins in its next five starts. Don was very pleased with today’s run, particularly the time recorded, as it was the best he had run in six starts over the 400m distance at Gawler, which have yielded three wins and two seconds. Don had just missed out on a win earlier in the day, when in race 5, his runner Daisy Maree had failed by just a head to run down the winner, Dolly Jo, so Don was pleased to have won with Dynamo Jezz.

Don has always had a dog around, even as a youngster, and had helped his uncle training greyhounds at Willaston, a long time ago. It seemed a natural step for Don to become more directly involved, and so in 1981 he took up training himself, an interest he still enjoys. Don appreciated the support he receives from Gail, which allows him the opportunity to participate in and enjoy his hobby.

In other racing, Ben Rawlings brought up an early double with first start winner Ed The Expert, followed by newcomer Phosphenes, who has now scored two wins from as many starts, both at Gawler.

Racing is held at Gawler every Friday and Tuesday afternoon, so please join us for close up racing action and a great meal. Please check the race times, as with the expected hot weather, they may 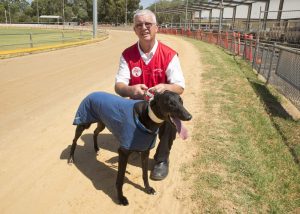