The lack of suitable races in Tasmania resulted in a greyhound being sent to SA, and scoring another win at Gawler on Friday.

In a Mixed Grade 3/4 race over 400m, after a bit of a scrimmage at the start, Dakota Grace (7) momentarily took the lead from Crackenback (2). However shortly after, Crackenback maintained the rails position and took advantage of that to go the front, and steadily increase his lead, crossing the line 3 ¼ lengths ahead of his rivals, running a handy 22.94 secs for the event. Hold On Digger, a winner last week, ran on well into second position for Graham Brown of Whyalla, and Dakota Grace finished third for Colin Simes of Two Wells.

Crackenback is trained at Lewiston by Mike Wittholz for Mick Louth, a former resident of Cockatoo Valley in SA. Mick now lives in northern Tasmania, where he races a small team, but there are only the three tracks, which limits the racing distances available. Crackenback’s ideal distance is around the 400m mark, and so both Gawler and Angle Park are suitable for him, which prompted Mick to increase his opportunities by switching his racing here.

Since arriving in SA back in September 2018, Crackenback has taken well to the SA scene, winning on nine occasions, and with multiple placings. Mike Wittholz reported that “Zack” is a good kennel dog, a natural hard chaser with very good track sense, and has won from all boxes. This has helped him to be a model of consistency, achieving 16 wins and 20 placings from 64 career starts, and often not far away when missing a place.

Racing is held at Gawler every Friday and Tuesday afternoon, so please join us for close up racing action and a great meal. Please check the race times, as with the expected hot weather, they may be altered. 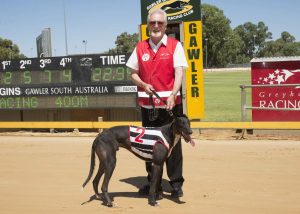