The way to start a New Year

THE WAY TO START THE NEW YEAR

What better way to start off 2019 than to win the very first race of the New Year, with a greyhound having its first race start. Named Flying Double, it must have been an omen as the connections followed up with another winner later in the day, adding some icing to the cake.

The winner is trained by Bob Isaacson and is raced by his wife Debbie Isaacson and Betty Molloy. The trio didn’t have long to repeat the feat with another winner, which came in the third race, also a 400m Maiden. Their runner, Five Grand quickly got to the front from box 1 after some early jostling, and then careered away to win in untroubled fashion by eight lengths, in his debut run. Kid Me Never (8) ran second for Kel Stott of Halbury, and Long Gully Marli was third for Paula Hearnden of Angaston.

The connections were very pleased with the day’s wins and particularly so as they were both debut wins. Debbie explained that they had been looking for some replacement racing stock, and so had decided to follow up some options on the internet. They ended up purchasing two four month olds by that means, and added a local pup from a SA auction, so they could be reared together.

Bob and Debbie first got involved 18 years ago as owners, before making the decision to train themselves. Betty has been involved as an owner for about 15 years, and enjoys the social aspects of greyhound racing. The third pup purchased, So Foxy, was also having its first start and was engaged in race 2, but couldn’t replicate the other runs, finishing in fifth spot. but they were pretty happy overall. With some early results like this, there will be plenty to keep them interested.

Gawler now races every Friday and Tuesday afternoon, but please check starting times as they can be affected by the current hot weather. 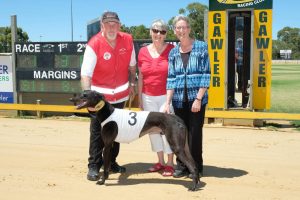