The Primetime Racing syndicate had two littermates engaged at Gawler greyhounds on Wednesday morning, and enjoyed success with one of them.

In the first restricted race over 400m on the card, Baudelaire bounced out the best from box 2 to lead the field, but Demolisher (6) quickly gathered speed to take over front running. Demolisher continued the strong run and was able to maintain the handy lead, to win by just over four lengths over Baudelaire for Kiah Hurley of Lewiston, and third going to Pearling for Michael Taylor of Windsor Gardens.

Demolisher is trained by Vadim Roz at Two Wells, and is raced by a group of mates known as the Primetime syndicate, managed by Derek Anderson. Derek decided to make the move into greyhounds about three years ago, after having an interest in thoroughbred racing syndicates. Buying a property at Callington, his intention was to breed and rear his own greyhounds, but at this stage he has yet to breed a litter, but is looking to start in that direction soon.

He instead bought two pups from the same litter at six months of age, and reared them. After their initial education period, Derek sent them to Vadim Roz for some pre-racing work, but circumstances changed, and Vadim helped out Derek by becoming the trainer. Derek has now seen himself clear to take over the training, so he was taking Demolisher and his brother Excavator home after the race. Unfortunately Excavator, which was in the following race, didn’t run quite as well, but Derek said that Vadim has done very well with the pair, with Demolisher winning two and Excavator one, plus placings, from a handful of starts each.

Being new to the sport, Derek said he was still learning and was very appreciative of the help and advice he has received from those within the industry. Around the kennels he is thankful for the help he receives from his wife Angela. Derek is also putting something back into the industry by joining the committee of the new Murray Bridge Greyhound Racing Club, with Derek describing the new facility there as “awesome”.

Racing times at Gawler are every Tuesday and Sunday afternoon. 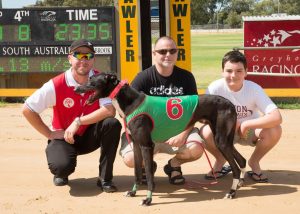