The owner and trainer combination of Ken and Mel Trowbridge provided another winner from their Kinloch Brae x Footluce litter at Gawler greyhounds on Tuesday.

Ken and Mel have been in the greyhound scene for about 10 years, and have achieved considerable success during that time. It all started when Ken and Nathan Wilson, who is Mel’s brother, decided to get into the sport, with Footluce their first runner. Footluce only had six runs for one win, but it was when Mel and Nathan decided that they saw enough in her to breed a litter, that their success took off. After a lot of research and taking a chance, they decided on a stud dog, with the resulting litter being everything they had wished. It produced some exceptional greyhounds, one of which, Footluce Diva, is the mother of Jazzy Footluce. From that same mating, Ken and Mel also race Axel Footluce, which just two weeks ago won the prestigious Group 1 National Derby in Sydney.

While Jazzy Footluce has not reached those dizzy heights yet, the greyhound has recorded two consecutive wins at Gawler, taking her total to five wins and five placings from 17 starts, which is a handy performance. Mel just loves the dogs and enjoys the challenge of selecting and preparing them. She said that having the greyhounds was the only way she could ever get to have six dogs around the house, so it all fits together well. 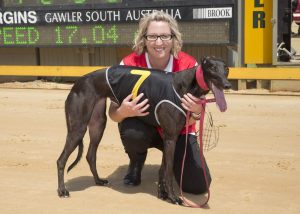