Reeling in a winner

REELING IN A WINNER

Owner and trainer Tyson Bradley, brought only one greyhound to the Gawler track on Friday afternoon, but he went home with a winner.

There are not many races run over the 643m distance at Gawler these days, but one was programmed as the first race on Friday. In the small field of five, Zizou De Kahn from box 6 and Staunch As (1) quickly settled together in the front, with the rest just in behind. Down the back straight, Spring Irish (4) made a forward move, with Motown Kenny (8) following him through. On reaching the home turn, Spring Irish hit the front from Zizou Kahn but in the run to the post, Motown Kenny finished strongly, and in a tight tussle, went on to win by half a length. Second was Spring Irish, with Spring Spinner (2) in third spot, both trained by Troy Murray at Lewiston.

Motown Kenny is trained at Meningie by Tyson Bradley, and being based there requires a few hours to get to the Gawler track, so Tyson is not a regular visitor there. However he did comment that “a win makes it better”. “Kenny” was purchased by Tyson from a breeder in NSW, at about 20 months of age, and has had his racing career in Tyson’s care, which has resulted in 12 wins and 24 placings from 69 starts to date.

Tyson can remember the exact date that he had his first race runner in 2016, which was made memorable as that greyhound, Ezigo, won at his first start for him. Interestingly, after many more races, Ezigo was unable to repeat that feat, and Tyson had to be content with multiple placings instead.

A full time fisherman in the Coorong, Tyson enjoys his hobby of greyhound training. Introduced to the sport with a work colleague, Tyson was fortunate that the successful breeding and training team of Cameron and Yvonne Butcher were nearby, and they supplied his first runner, along with plenty of helpful advice along the way. With a full time job, Tyson finds his small team of four dogs the right number for him, and his aim is to prepare the dogs at their best, so that they can perform to the best of their ability. 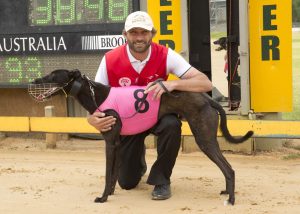