Have Greyhounds Must travel

HAVE GREYHOUNDS, MUST TRAVEL

When you have to travel a long way to race your greyhounds, it certainly helps to go home with a winner. That was the case on Friday at Gawler, when a family from Whyalla enjoyed a successful result on the day.

In the 400m Grade 5 event, Iceni Rival from box 3 and Dolly Jo from box 1 had a short contest for the lead before Hold On Digger (8), swept around the outside as they reached the home turn, to edge the others out for the lead. Hold On Digger was then able to open up a break, before extending the margin on the line to nearly two lengths. Dolly Jo, which had lost a bit of ground during the running, finished on well on the outside to grab second spot for Angela Modra of Gawler River, while So Si Bonne also ran on well into third placing for Marcello Calicchio of Two Wells.

Hold On Digger is trained at Whyalla by Graham Brown for his sister Debbie Stuppos, and Terry McCallum. Debbie had bred the litter from her former racing female Sammy’s Sister, and Hold On Digger was named after his habit of digging holes when he was a pup.

Graham was unable to be on course for the race, but the rest of the Brown family took over the duties on the day. Graham’s wife, Erica, said that the family have been involved for over 40 years and both sides of the family had been involved prior to that.

Running a kennel at Whyalla requires an early departure at 6am and a lot of time on the road to get to the nearest major track at Gawler, so you have to be keen. The family enjoy the breeding and breaking in of the pups, and the joy of seeing them mature and improve. They currently have five dogs in work, and eight, one year old pups, plus a couple of youngsters. Erica said that Digger is a consistent performer and was pleased with the day’s win, as she had thought that this race might be harder than last week, when he ran third. Friday’s win took his tally 6 wins and nine placings, so that would have made the trip home that bit easier.

Racing is held at Gawler every Friday and Tuesday afternoon, so please join us for close up racing action and a great meal. 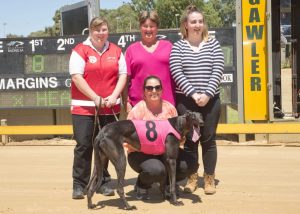