A Spring in her step at Gawler

A SPRING IN HER STEP AT GAWLER

A greyhound with a liking for the Gawler track added another win to her tally on Tuesday afternoon.

The start of the Grade 6 event over 400m, saw four runners jump as one and it took a little time for Big Black Siyan to momentarily hit the front from box 4, but Spring Waratah (7) quickly took over the running, with Taabi (3) tucked in close behind. Spring Waratah was able to gradually extend her lead over the field and was not challenged again, going on to win by just over 4 lengths, in the time of 23.06 secs. Big Black Siyan ran second for Narvette Treloar of Lewiston, with Talitha Cumi (1), which had made up a lot of ground mid race, finishing a length away in third place for Neil Mann of Kalbeeba.

Spring Waratah is a red fawn female, trained by Bob Fletcher of Woods Point, near Tailem Bend, for owner Vince Barry, who has had many greyhounds with Bob over the last three years. Bob has been in the greyhound industry for about forty seven years, starting out when a teenager at the Strathalbyn track, in the very early years of the sport. He only has a small team in work, a situation he enjoys, with Spring Waratah the only greyhound currently racing, although several others are returning from a spell for minor injuries.

Spring Waratah’s career results are 32 starts for eight wins and five placings, with seven of the wins and three of the placings being from fourteen Gawler starts. So clearly she does like the Gawler circuit, which Bob put down to the tighter turns and shorter straights seem to favour her racing style.

While Bob currently has the small racing team, plus a “few retirees” on his property, he is planning to expand his operation by breeding and rearing his own pups, something he has always wanted to do. Bob finds greyhounds very easy to work with and enjoys their company, which he must find very satisfying to have stayed involved all these years. 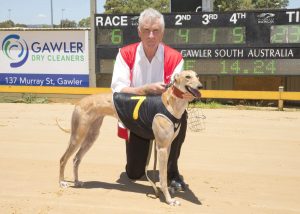