STITCHING UP A FUTURE

STITCHING UP A FUTURE

Former Broken Hill residents Clint and Shelley Trengrove landed a winner at Gawler on Tuesday, and are two trainers who can see a future in greyhound racing in SA.

In a Grade 6 event over the 400m trip, Shelley’s runner, Stitch ’em Harry began well from box 8, and crossed over to the rails to lead Polished Jewel (1) and Watto’s Revenge (7). Stitch ’em Harry ran out to a handy lead of three lengths, and was not challenged in the race, to go on and win by nearly five lengths. Watto’s Revenge finished in second spot for Sharyn Gray of Lewiston, with Polished Jewel in third position for Kim Johnstone of Two Wells.

Stitch ’em Harry, is a two year old black dog, and is owned and trained by Shelley at their new Lewiston property. He has now had 9 starts, all at Gawler, resulting in two wins and two placings.

Clint and Shelley decided to make the move from Broken Hill as Clint was working long hours there and not enjoying it. He recalled that someone had said to him “that if you can find a job that you really enjoy, it won’t seem like work at all”. Having been an owner/trainer in greyhounds for some ten years, and with Shelley loving animals, they decided to make the move to Lewiston, to give it a go on a full time basis. Starting from scratch, they are establishing their own property to suit their own training requirements.

They have purchased a number of pups to establish their racing stock, but their intention is to predominantly breed their own pups. At the moment they have over twenty greyhounds, which includes six racing dogs and pups of different ages.

They are relishing the new environment, especially doing something they like and being so close to the Gawler track. Clint related that sometimes a 1000 kilometre trek was involved to trial or race greyhounds while based at Broken Hill. They have decided to use the “Stitch ‘em“ prefix with their dogs, named after Clint’s successful runner Stitch ’em Up , and Clint commented that makes it a lot easier when naming a lot of pups. With the plans they have in place, they just might need plenty of names up their sleeves.

Great racing continues every Sunday evening and Tuesday afternoon at Gawler, so join us for a meal while enjoying the racing. 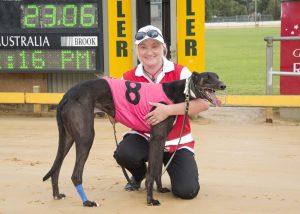