A trainer that had his last winner at Gawler greyhounds some ten years ago, was pleased to return to the winner’s list on Sunday night.

In the first event of the night, a 400m Maiden event, Avatar Viking was first away from box 3, quickly opening up a handy break over Dinah Palms (6) and Jay Jakit (8). Dinah Palms was able to draw on level terms as they reached the back corner, when Avatar Viking started to run wide. Avatar Viking continued to drift outwards, and Dinah Palms decided to go around the outside of that runner, coming home with a strong run. In the meantime, Jay Jakit had made the most of the vacant inside space and the three greyhounds went to the line, with very little separating them. In the final decision, Dinah Palms had won by a head over Jay Jakit, with Avatar Viking being a neck away in third place. Jay Jakit is trained by Kiah Hurley at Two Wells, with Avatar Viking trained by Kevin Bewley at Lewiston.

Dinah Palms is trained by Les Carraill and raced by his wife Pam. It was a welcome change of fortune for the Carraills as Les said that their last win at Gawler was in about 2008. They have raced greyhounds “on and off” since the 1970s, but have often had breaks during that period. Dinah Palms is one of three greyhounds they currently have in work at their Willunga property, and was purchased at the 2015 greyhound auction. This was Dinah’s first win in 19 starts and Les thought the win was “bloody magnificent” while Pam was “still in shock”.

One principle that they both follow is that they always keep their greyhounds themselves after they are retired, which explains the gaps between their racing greyhounds. All their dogs are now named “Palms” after the distinctive driveway lined with date palms they have on their property. Les and Pam both enjoy the social side of greyhound racing and the chance to get out, as well as the company of the dogs themselves. An unexpected win certainly makes it all that more enjoyable.

Every Sunday evening and Tuesday afternoon at Gawler, there is great greyhound racing, so join us for a meal while enjoying the racing. 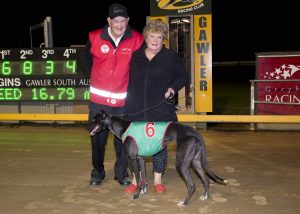