Davoren Park trainer Rod Seipp has shown plenty of patience with his greyhound Zen Warrior, as it has taken 40 starts for the dog to record its first win.

At Gawler on Sunday night in the first Maiden event over the 400m trip, it was the reserve runner Maximum Stress from box 1 that took up the early running over Pretoria Son (5) and Zen Warrior (2). Zen Warrior then burrowed up on the inside of Maximus Stress, with Hold On Digger (7) going around on the outside. As the field entered the home straight there was a line of three contenders, but it was Zen Warrior that got to the front, withstanding late runs from Pretoria Son and Lightcry (3), to record a 1 ½ lengths margin. Pretoria Son was second for Les Bates of MacDonald Park, with Lightcry finishing third for Don Turner of Lewiston.

Zen Warrior was bred by Rod Seipp and he trains the greyhound for himself and Scott James. Scott resides in Victoria, where he also trains their promising last start winner All Dolled Up. Rod has had an “on and off” involvement in greyhounds for the last 20 years, caused by periods of employment in remote areas. While this sometimes hindered opportunities to train, he was able to maintain his interest through ownership. His introduction to greyhounds started while he was recovering from an injury, and some mates presented him with a couple of pups to help with his recuperation. That was the catalyst for Rod to get involved, a decision he is happy with as he has always enjoyed it. He has just two racing dogs plus a retiree on his property but is considering becoming further involved.

Despite taking so long to win, the black dog has run 11 placings, so he was not often that far away from the win. Rod put down his win to a recent change where the dog now runs around the backyard, and Zen Warrior has started pushing through in the fields, and holding his ground better than before. As Rod said, “the dog is happy and I am happy about that.” You can’t go wrong with that mantra.

Racing at Gawler continues every Sunday night and Tuesday afternoon, so join us for a great meal and racing at the track. 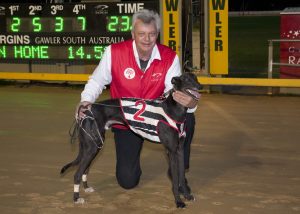