In greyhound racing, a trainer can sometimes get three winners on a program, but it is very rare to get them in consecutive races, and even more so when you have only three runners on the day. However that is what trainer Brodie Jessup achieved at the Gawler track on Tuesday.

Brodie kicked off his run in race 2, a Maiden event over the 400m journey, with Data Queen. Jumping from box 2, Data Queen was initially headed by Roudy Tyson (1), and when that greyhound ran wide, Data Queen was forced wide too, but able to then get around that runner. Going to the front at the back turn, Data Queen went on to win by over 5 lengths.

The next runner was Winlock McGregor in a Grade 6 race over 400m. Winlock McGregor, out of box four, led the whole trip, but had a tight tussle with Lateratus (5), going on to win by a length, giving the Ocean’s Ten syndicate, managed by Wayne Meaker, their first winner.

The final win came in another Grade 6 400m race, with Leggian Blonde from box 5 leading for most of the journey, over Boo Hoo (7). Running a handy time of 22.81 secs, Leggian Blonde was able to win by just over two lengths.

Brodie was unable to be at the track on Tuesday, but partner Maria Tymkiw was on hand, along with Brodie’s father Trevor, and Charlie Adcock to help. Maria said that she and Brodie had made the move from the city, where they were restricted with the number of greyhounds they could have, out to a new property at Two Wells, about a year ago.

At the moment, most of their greyhounds are sourced from a reliable contact in NSW, but they hope to venture into breeding their own line of greyhounds as well. Maria is a newcomer to the sport, but Brodie has about 20 years of experience while helping his father, but also training for himself. Maria and Brodie see a future in the industry, describing SA as having a leading edge in animal welfare, which was important to them both.

Currently In their kennel, they have six racing dogs, some nearly ready to race youngsters, and young pups as well. With that number to care for and with their future plans, Maria said that success can only be achieved with a real team approach and support in their family business. Having a good foundation now to build on, and with a few more successes like Tuesday, the future looks promising.

The racing continues at Gawler every Sunday night and Tuesday afternoon, so enjoy great racing and a meal at the track. 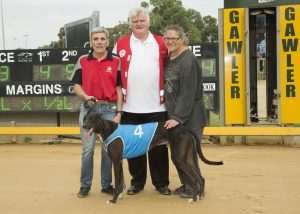