At Gawler greyhounds on Tuesday, the Gawler Greyhound Racing Club continued its support of the local RSL. Vice President Ian Easton, Treasurer Tom Modra and Errol Herman from the RSL Gawler Sub Branch were on hand to receive a donation from the Gawler Club, and to conduct a pre-Anzac Day ceremony. In addition, all races on the program were named in honour of former services members who were from the Gawler district.

Two trainers, Bosko Stamenkovic and Lisa Rasmussen, both went home with a double for the day. Bosko’s first winner came in the Nurse Sister Lucy Tremlett Maiden over the 400m journey, when Lateralus, which was having its first race start, was able to lead all the way from box 4 to record a 6 length victory.

Bosko’s other winner came in the J.D.Rudall Stake over 531m, when Joeli Magic, took the lead late in the race, winning by just a neck over Fantastic Chief. Joeli Magic had fallen at his previous run at Gawler, so this was a pleasing result for all concerned, and has taken the dog’s record to five wins and five placings from 14 starts,

Murray Bridge based Lisa Rasmussen’s first winner came in the James Wood V.C. Stake, a Grade 6 event over the 531m distance, when Dyna Layla led for most of the race to win by just over 2 lengths. Dyna Layla was having its first start at Gawler, after recently transferring from Victoria.

The second win for the kennel came in the G.Kavanagh Stake over 400m, with Top Weight able to lead for the whole trip out of box 5 in a great time of 22.78 secs. The Rasmussen family was able to take out all three placings, with Lisa also training second placed Allen Eamon, and husband Tony having the third placed Desert Missile.

Racing at Gawler is every Sunday night and Tuesday afternoon, so enjoy great racing and meals at the track. 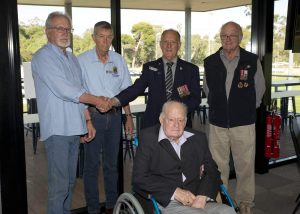