OPERATION FLINDERS GETS A BOOST

OPERATION FLINDERS GETS A BOOST

Greyhound Racing SA is actively supporting Operation Flinders, in a new initiative. The SA charity which runs programs to assist young people, will receive a donation of $250 for every winner from box 1 in SA, during the month of April. So far it has already raised $11000, with plenty of races still to go.

Helping that donation along at Gawler on Tuesday was Reddy Successor, the first box 1 winner on the day. Beginning well, Reddy Successor had a short tussle for the lead with Miss Jasmine (3), and Top Weight (8), before breaking away to lead by about two lengths down the back straight. Allen Eamon (7) threw down the challenge, but Reddy Successor was too good, and went on to score by just under two lengths in 23.21 secs. Second was Allen Eamon for Lisa Rasmussen of Murray Bridge, with husband Tony training the third placed Miss Jasmine.

Reddy Successor is trained at Renmark by Nicky Price, for herself, husband Linton and Peter Hamilton, and have been racing greyhounds together for ten years. Reddy Successor was purchased from interstate, and has now won three times and had four placings from 16 starts over the 400m trip at Gawler. Nicky said that the red brindle dog likes the inside draws to show his best, but he had not drawn box 1 for some time.

Despite being remote from all tracks, Nicole and Linton have decided to invest further in the industry, building new racing and whelping kennels. Nicole said that as a result she has been achieving her best results with her team of seven racing dogs. They have made a definite commitment to breed their own stock, with Nicky acknowledging the great support she had received from SA owner and trainer Cameron Butcher.

And speaking of support, Nicky was thankful for the help she receives from her children Liam, Cameron and Jessica, with Jessica sharing the load of looking after two litters of pups, and with the trialling on the straight track.

Further money was added to the charity drive when Stack The Aces, trained by Lauren Harris, won a later race, and doubtless there will be more donations by the end of the month. Don’t forget that racing is at Gawler every Tuesday afternoon and Sunday evening. 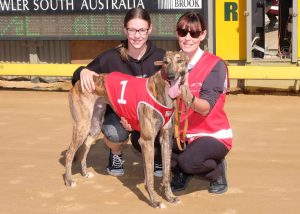