Trainer Adam Manton can’t normally get to the track during the week due to his employment, but while on holidays, he took the opportunity to enjoy a win at Gawler greyhounds on Tuesday.

It was a very even start In the Grade 4/5 531m event, with five greyhounds on equal terms after the start. It took them to reach the first turn before Rip It Ralph (box 1) was able to establish a narrow lead over Sutton Nicky (3) and Vee Bee Dooley (2). Rip It Ralph stuck close to the rails and was able to increase the lead down the back straight, going on to win by 2 ½ lengths in the time of 30.92 secs. The minor order didn’t change, with Sutton Nicky running second for Angela Modra of Gawler River, and Vee Bee Dooley taking third spot for Scott Feltus of Lewiston.

Based at Lewiston, Adam trains Rip It Ralph for owner Sean Nathan. The pup was bred locally by Ashley Furner from Sean’s former racing female Ticket To Mars, which was Sean’s first greyhound. Having only the nine starts, Ticket To Mars recorded four wins and two placings. Sean was looking to place “Ralph” with a trainer and so Ashley introduced Adam.

Rip It Ralph is one of those handy type dogs, that has now chalked up nine wins and 22 placings from 53 starts, running some good times over the 500m journey in the process. Adam said that Ralph previously had some niggling minor injuries, and a bit of bad luck, so after a short break Adam decided to switch him from Angle Park to Gawler. That did the trick and Sean was pleased with the good win back from the spell.

Adam also reported that he had a training accident with Ralph, caused when the two got their legs tangled up in the leads. Adam came off the worst, falling and suffering three broken ribs as a result, but he is nearly back to normal. With four greyhounds in work, and nine pups to rear, this is a lot to handle with a full time job as well. Adam can only achieve this with the help from partner Jayne Jarman, and a lot of teamwork. With Jayne employed in the Greyhound Adoption Program, Adam likes to help out there as well. Adam has further extended his industry work, recently becoming a committee member of the Gawler Greyhound Racing Club.

The Gawler Club races every Sunday evening and Tuesday afternoon, so join us for great racing action and meals. 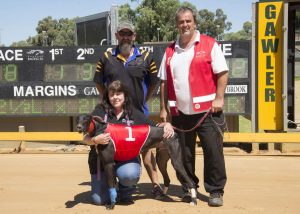