Former NSW greyhound Kansas Lane had his first win since moving to SA, at Gawler on Tuesday.

In a Grade 6 event over the 400m trip, Hayride Heeney from box 4 got to the front in hotly contested start from Queen Allen (6) and Kansas lane (1). Passing the 643m boxes, the field bunched up, with possibly five winning chances, but it was Kansas Lane that took the lead, racing to the winning post two lengths ahead of the fast finishing Ya Kiddin’ Me (5), trained by Paul Fagan of Calomba. Third to finish was Queen Allen which had copped a bit of interference at the home turn, for Liz Harley of Lewiston.

The winner is trained at Lewiston by Kevin Murnane for Matt Wallace who hails from Temora. NSW. Matt had raced the dog in that area without success, but decided to contact Kevin to see what opportunities there were in SA. Kansas Lane had its first start for Kevin in January, but despite being close with four seconds from his nine starts, had been unable to win prior to today. This was Matt’s first win with his first greyhound, so he was pretty rapt with the result.

Kevin had been an owner in Queensland some ten years ago, but had not trained, before moving to SA. His love of greyhounds and the thrill of being able to improve their racing results is what made him take up training, and still keeps him interested. With 20 greyhounds in work, plus a few retirees, and some pups, it takes a lot of help to run the kennel. Kevin is therefore very grateful for the assistance provided by Janine, who Kevin good humouredly referred to as the “kennel foreman”.

Racing action continues at Gawler every Sunday evening and Tuesday afternoon, so why not join us for great racing and meals. 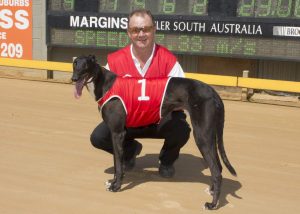