FAGANS TO THE FORE

FAGANS TO THE FORE

At Gawler greyhounds on Tuesday, the Paul and Leanne Fagan team enjoyed a great result when they were able to lead in four winners for the day.

The first winner was Soi Si Bonne, which was able to lead all the way in race 3 over the 400m journey, to score at the big odds of $31 from Victa Caleb and Zipping Kim.

In race 6, also over 400m, Cash Producer from box 4, took over after the start to lead, and achieve a three length victory over Desert Missile and Zoometrical. Cash Producer recorded the win at the good odds of $23.

Prancer Dancer was able to repeat the dose in the next event, again leading all the way from box 1, but this time in a much closer contest with the margin being just a neck. Second was Magical Strike and third was Wilby Dusty.

The final winner for the day was Goose Buzz, which like two of his kennel mates, led for the whole trip, this time from box 8, defeating Brilliant Bails by over two lengths into second place, with Emerley Jose third.

Goose Buzz is owned by Greg Burrell of Gulfview Heights, and is one of four greyhounds he has racing. Purchased as one of a pair of pups from Queensland, Goose Buzz has shown a liking for the Gawler track and the 400m distance, missing a place only once there in eight starts, winning four with three placings. Greg has been interested in the racing sports and decided on entering the greyhound industry as it is very affordable. He gets a big kick from having a runner, with a win putting the icing on the cake, and still has his first greyhound, named Murrell Burrell, as a retired pet at home.

The four winners are trained by Paul Fagan at Calomba, but in true teamwork, the duties of handling the dogs at the track fell to his wife Leanne today, as Paul was ill. Leanne is a trainer in her own right and was surprised at the odds on offer for the first two winners, but not the results. They had been running without success over the 500m trip, and they had both appreciated the shorter distance today.

Paul and Leanne have a busy time with twenty greyhounds in work, plus rearing pups and looking after greyhounds awaiting placement in the Greyhound Adoption Program. However they still enjoy the industry and having this sort of result certainly helps. As for “Goose”, Leanne hopes to move him up to the 500m journey soon.

It is great weather to get out and enjoy the racing and a meal at Gawler every Sunday night and Tuesday afternoon. 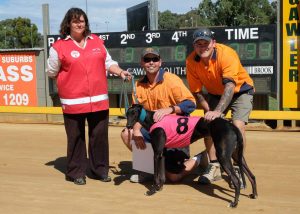