Gawler Greyhounds held a race meeting on Easter Sunday night that saw approx. 350 patrons attend on a beautiful evening. There were plenty of activities for the kids with Easter Bunny making a special appearance to hand out some Easter eggs.

There were 2 feature races held on the night being the 531 metre Grade 4/5 Easter Sprint Stake and the 531metre Future Stars race for SA bred Greyhounds whelped in 2016.

The 2018 Easter Sprint was a strongly contested race between father and son Ray and Troy Murray, with Troy taking the honours with favourite Aston Kody running in a time of 31.05 seconds over the 531metre journey. Ray’s Greyhound Aston Noir took an early lead around the first turn and down the back straight, but on the 2nd and final turn Aston Cody snuck up on the rail to take the lead. Aston Noir was then headed by Troy’s other runner Spring Lush who finished in a dead heat for 2nd place. Troy’s Aunty Mandy(pictured) and owner of Aston Cody had come over from England for a visit with family and was very pleased to have been attending the night to see her Greyhound take out the Easter Sprint.

Race 8 Futures stars was won by another prominent SA strainer Cameron Butcher with his greyhound Abuzz. Cameron regularly makes the trip form down South to attend the Gawler races which is really appreciated.

Racing at Gawler greyhounds continues on Tuesdays and Sundays and we look forward to having you along. 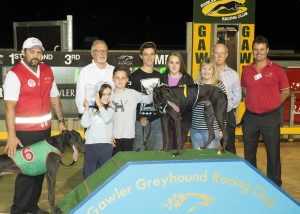