Lewiston trainer Des Hockley has a couple of consistent performers in his kennel, with one of those winning at Gawler greyhounds on Sunday night.

In race 5 on the program, a mixed Grade 3/4/5 event over the 400m trip, there was a hotly contested start, which took some time to sort out. Magical Strike (4) got the upper hand over Mr Rumballs (1) who was on the rails, and started to edge away. Magical Strike stretched out the margin to about 5 lengths, which he maintained until the finish, running a time of 23.00 secs. Maz’s Mitzi (3), trained by Karen Miegel of Murray Bridge, finished in second place when getting a run along the rails, with Mr Rumballs in third place for Neil Mann of Kalbeeba.

Magical Strike is trained by Des for his partner Renata Maruszczyk, who bred the litter from their former racing female, Bourne Cool. The January 2014 whelping has now run a career total of 118 starts, for 15 wins and 40 placings. Des described Magical Strike as a very honest runner with a liking for the 400m journey. That liking has now seen Magical Strike have 99 starts over that distance at Gawler.

Likewise Des’ other dog, Jack In Black, has many similarities, being also whelped in January 2014 and having a similar 114 starts, but recording 26 wins and 43 placings in the process. Jack In Black is in excellent form, having won his last two starts, both at Gawler, in times that would make some of his younger competitors envious. Des said that they were both honest performers that he doesn’t need to trial, as they have been largely injury free, and maintained their fitness. When the duo eventually finish their racing careers, they will be entered in the Greyhound Adoption Program, who Des said were doing an excellent job to place retired greyhounds.

With sixty years of experience in the industry, Des is still enjoying the sport, helped with plenty of support from Renata. Between them they have nine dogs in work with a further twelve 4 week old pups to keep them busy.

With Gawler racing every Sunday evening and Tuesday afternoon, it is a good opportunity to enjoy the racing and a meal. 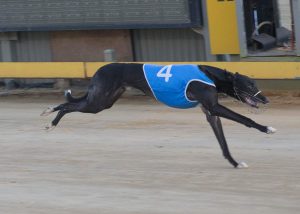