After recently rekindling his interest in greyhounds, owner trainer Robert Barclay landed his first winner at the Gawler track on Sunday night.

In the second race on the program, the Final of a Maiden race over the 400m distance, Robert’s runner Box Of Bandaids, began well from box 8, but couldn’t immediately find the lead. Best away were Run Gordon (1) and My Mate Boofa (7), with Box Of Bandaids close at hand, but caught on the outside. As they entered the back turn, Box Of Bandaids was able to break away from the other two dogs, and went on to win by nearly three lengths in the race time of 23.23 secs. Run Gordon finished second for Brian Clarke of Semaphore, and the fast finishing Spring Waratah (6), ran on well from back in the field for Greg Board of Murray Bridge.

With such an unusual race name, there had to be a story behind that. Robert explained he had acquired “Boof” from a breeder NSW, and was floated across to Adelaide. Robert discovered that Boof is a very boisterous and excitable dog, and on the trip over, he sustained some superficial scratches. On arrival, Robert’s wife Colleen commented that he will need a “box of bandaids” to treat him. The comment stuck with them, and became his name.

Robert had been a trainer interstate some 40 years ago, but despite some success, he had to give it away when circumstances changed and it was difficult to get to a track. Last year, he decided he would like to get back into what he had enjoyed so much, and he renewed his license. He now has three greyhounds in his care at his Reynella property, and also owns other greyhounds that are with other trainers. Both Robert and Colleen have always loved greyhounds and enjoy racing, with Colleen usually joining Robert at the track. However tonight Colleen was unable to be present, due to her other commitments, so let’s hope Robert can soon put in a repeat performance.

With racing every Sunday night and Tuesday afternoon, Gawler is the ideal venue to enjoy great racing and a meal. 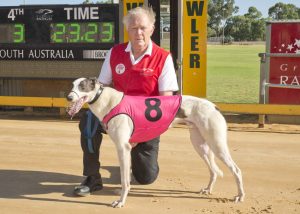